“[Here] is what reading is all about: yes, it will make kids smarter and give them a better start in life than non-readers, but for me that’s not the point. The point is that reading is fun…”

This is a quote from a recent article in British newspaper The Guardian by Charlie Higson, author of a variety of YA fiction including the Young James Bond series. Sure, as a writer he might have a vested interest in promoting reading, but there is no denying the inherent truth of what he is saying. To get kids to read, and keep reading, particularly over the long summer months, it must be a pleasurable experience. This is definitely the point that we need to get across to children now that the sound of the school bell has faded and it seems like forever before the leaves start to turn and they’re back at their desks. Summer is for having fun, and that includes reading!

Many families, teachers, and librarians worry about the summer learning slide, and with good reason. A study done by Reading Rockets found that for “116 first, second, and third graders in a school in a middle class neighborhood …the decoding skills of nearly 45% of the participants and the fluency skills of 25% declined between May and September.” Attention clearly needs to paid to reading over summer vacation if we are to combat this trend.

Here are some tips to help your children and students use bilingual books for having fun and improving their reading skills before September:

There are also a variety of folktales and stories from around the world available in bilingual editions (English and another language text on the same page), so children who speak a different home language can also find stories that are familiar to them. A group of parents who want to encourage their children to become bilingual readers could find a set of books to swap throughout the summer, so no-one gets bored!

At school, children are used to discussing books. The question-and-answer structure will be familiar to them and therefore allow them to feel more comfortable and take more risks speaking their new language. Simple discussions about feelings and plot are great tools to help embed new vocabulary: “How does the explorer feel about the animals at the end of the book? What has changed?” “What were your favorite plants that you saw in the drawings?” See if you can get your children to answer in both languages. They’ll feel more involved in what they’ve read and excited to continue their literary journey!

Are you a librarian? For you, summer is a great time to reach out to the community and welcome ELLs into your stacks. As Robertson writes, many families are unaware of the great summer reading programs and bilingual resources you offer – so get some flyers translated and start sticking them up around town!

…And here’s a list of other great ways librarians are improving literacy for ELLs all over the country: http://www.languagelizard.com/newsarticle8.htm

Summer is such a perfect opportunity to show kids how much fun bilingual reading can be. How are you planning to use bilingual books to prepare your kids for the exciting year ahead at school?

For more ideas about summer literacy, check out the following Language Lizard blogs:

On a sunny day in London, when the streets are crowded with people enjoying the rare warmth, you can hear an abundance of different languages from the majority migrant groups in the city: families discussing the school day in Somali; teenagers gossiping in Turkish; imams greeting each other in Urdu.   But passing by the shop fronts boasting posters in languages from Polish and Bengali, you won’t hear German or Cape Verdean creole – not unless you go to Andrea and Xaxa’s for tea and cake.

Andrea and Xaxa met on Cape Verde, an island country off the west coast of Africa.  They now live with their eight-month-old baby, Bruno in London.  London is a city in which there are plenty of services and community groups for more commonly found home languages, like Bulgarian and Punjabi, but little availability of these amenities in less-common heritage languages like the ones Bruno will grow up speaking.  Andrea says she wants Bruno to have “the ability to converse with his family both in Germany and Cape Verde when visiting…and to pick up further languages more easily at school”, so she is determined that he will be able to use all three of his languages even though he won’t hear them spoken by his friends and the people he meets in London.  “I speak German to him when alone with him, singing German nursery rhymes and reading German books.  Xaxa speaks Crioulo to him and sings in Crioulo.”

Valentina, who emigrated from Italy, reads to her son Isaac every day in her native language, Italian, hoping that he will grow up to feel “natural and comfortable” with his two tongues.  She’s gone out of her way to to stock up on Italian books and tries to speak to him only in Italian, even when spending time with her English-speaking friends and their children.    It worries her a little that he will miss out on the subtleties of Italian and that “we could be missing a whole level of communication between us” but overall she feels that “the positives of raising a bilingual child outweigh the challenges.”  She’s excited for Isaac to communicate with his Italian family, have the opportunity to travel meaningfully around Italy, and to have the deeper “understanding of his own heritage” that only speaking the language can really bring.

These kinds of experiences happen in many different countries, including the U.S., and in small towns as well as in cities.  Irene lives in Norwich, a smaller, much less ethnically diverse city two hours’ drive northeast of London.  Her son Matthias is growing up bilingual.  “I want him to love both his languages equally.  But I think it is probably unrealistic because he will probably be exposed to it so little and need it so little.”  She says that though she tries “to speak to him in Danish as much as possible”, she regrets that she’s “not always good at being consistent.”  Her husband Roger is English, so she feels, “I always forget and automatically switch to English.  I know this is not good, but it simply happens.”  Like Andrea and Xaxa, Irene sings and reads to Matthias in Danish, including alternating the language of his bedtime story every night.  But she admits that it’s a “major challenge” not being part of a language community: “I do hope I can find some other Danish speakers at some point – kids he can play with.”

“Research says that growing up with more than one language is like exercise for the brain,” reports national early childhood expert Karen Nemeth of www.languagecastle.com.    “It builds thinking skills in school-age children and keeps the brain agile in late adulthood, but meeting the challenge of maintaining home languages is just as important for strengthening the family bond and honouring the family culture.  It really is worth the extra effort,”

This article from the New York Times describes research about the benefits of being bilingual that also supports the efforts that Valentina, Andrea and Irene are making to keep their home language growing with their babies:

So what can Andrea, Valentina and Irene do to ensure their boys feel proud of and confident when speaking their heritage languages?  Nemeth says that these moms and their partners are already doing the right thing by singing and reading to their children in their heritage languages.  This is especially important for Xaxa, whose mother tongue is not Cape Verde’s official language and is only spoken rather than written.  For Matthias, Isaac and other children with one English speaking parent, bilingual books can be a great way to share the same story in two languages with their two parents (or a parent and a teacher)

Bruno, Isaac and Matthias are also benefiting when their parents have conversations with them that are 100% in one language; it’s much less useful to simply identify objects for the child in one language, then another.

To add an extra boost of German, Italian, Dutch or Crioulo conversation power for their children, these parents can also search online for local groups who meet up for chats in their heritage languages.  Valentina’s already looking for playgroups in her area: “having friends who speak Italian too will be invaluable!”  And if they can’t find any ready-made groups, website www.meetup.com allows them to create their own local group and advertise it to others in the community.   They could stop into their local library to ask about family activities in different languages too – they may even be able to work with the library to start their own.

As the children get older, their local schools can be a great connection as well.  Parents like Andrea, Valentina and Irene may meet other families who speak their language at the school gates. They can also use their experiences and the books, stories and songs they’ve collected to bring their culture and language to the school as a valuable resource for all of the children.

The cultural and linguistic make-up of diverse cities like London is constantly changing — and maybe one day you’ll be able to hear Dutch on the street corners and Italian in the cafes.  But until then, kids like Bruno, Isaac and Matthias will continue to be special and unique, and lucky to be growing up with parents who are so invested in ensuring they grow up multilingual. 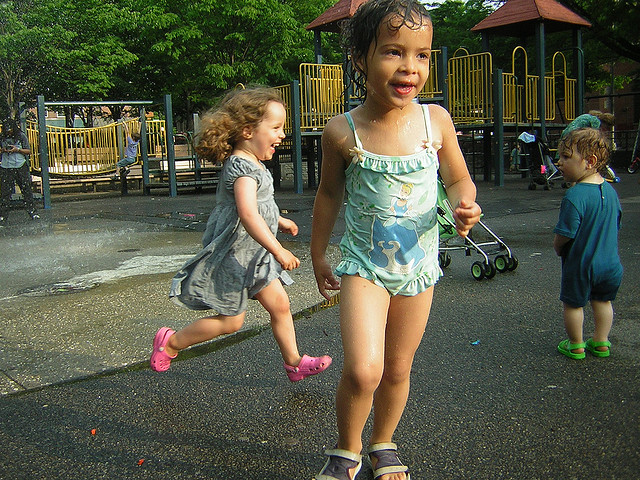 Summer is such a wonderful time for children: playing with neighbors in the sprinkler, splashing with friends at the local pool, eating popsicles on the back porch. Summertime freedom is expansive and overwhelming.

The downside of summer for many teachers, especially those teaching English Language Learners (ELLs), is that they often worry that all of the hard work that their students put in during the school year will decline during the summer months. Without daily input of spoken and written language, a student often starts to forget what she has learned and ends up working hard to get back on track in the fall. However, this need not be the case.

There is no reason why literacy has to be put on hold during the summer months with bilingual children. In fact, summer is a perfect time to give home and school languages the undivided attention they deserve. Without the need to focus on homework and after school activities, bilingual children and parents can have a wonderful time with literacy. It doesn’t take a lot of work. It just demands a good set of resources to work with and the willingness to follow through. END_OF_DOCUMENT_TOKEN_TO_BE_REPLACED 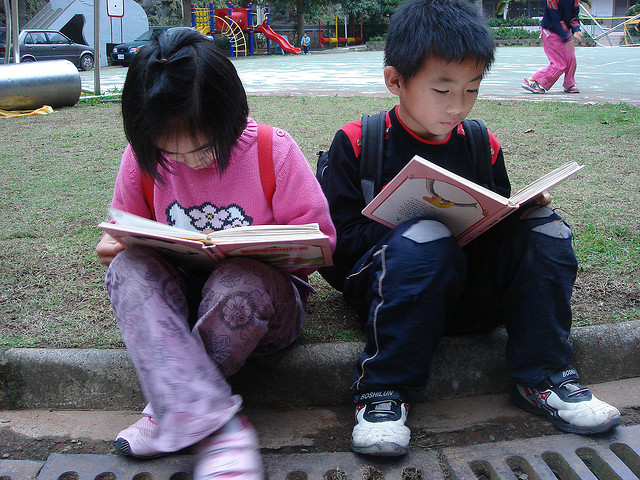 Research continues to show that support for the home language is an essential element in supporting children’s academic skills. Parents who engage with their children in their home language through discussion, reading books out loud and in everyday activities help children to do better in school, even if the school language is different from the home language. This is in contrast to research many decades ago that encouraged parents to speak the community language at home with their children, believing this would strengthen their children’s academic language skills. We now know that this past research was flawed and that, in fact, the opposite is true.

Bilingual books are wonderful tools to help create a bridge between languages. They give teachers the opportunity to educate children in the school language, while at the same time they foster an appreciation for the home language. Bilingual books encourage parents to continue using their home language, knowing that it will benefit, not detract from, their children’s school language learning. END_OF_DOCUMENT_TOKEN_TO_BE_REPLACED