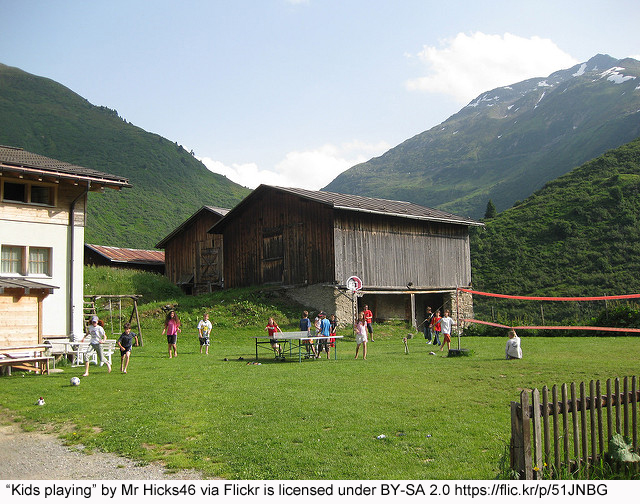 If you’re looking for something fun to do this summer, give these multicultural games from around the world a try! From games that you can play in a group, to one-on-one games, they are perfect for all ages. Get your kids or campers outdoors to play a fun round of Catching Stars or a competitive game of Hoops! It’s a great way to stay active this summer while learning about different cultures.

This game is typically played with a large number of players. Split the group into one smaller group and one bigger one. The smaller group is Catchers and the bigger group is Stars. All the Stars stand in a line on one side of the field, and the Catchers stand spread out in the middle. The Catchers say, “Star light, star bright, how many stars are out tonight?” The Stars respond, “More than you can catch!” The Stars then try to run as quickly as possible to the other side of the field without being tagged by the Catchers. If Stars are tagged by Catchers, they become catchers too. The game continues until all Stars become Catchers.

This is an active group game that is fun for children of all ages. Players form a line with each player’s hands on the shoulders of the person in front of them. The first person in line is the Head, and the last person in line is the Tail. The Tail yells, “1, 2, 3 dragon!” and the Head starts moving to try and catch the Tail. The rest of the players must follow the Head’s movements exactly, while staying connected to one another. If the line disconnects, then the dragon has died, and the Head must move to the end of the line to become the Tail. If the Head is able to catch the Tail, the Dragon survives! The Head still moves to the back of the line to become the Tail in order to give the next person in line a chance to be the Head.

It is helpful to have at least 5 people on each team in this game. There are two teams, and each team selects one person to be the Roller. The Roller will stand at the starting line with a hula hoop. The rest of the players will be on the side with small balls or bean bags. The Roller rolls the hula hoop past the people on their team, and they try to get as many balls through the hoop as possible without the balls touching the hoop. The team who is able to get the most balls through the hoop is the winner.

Similar to Dodge Ball in the US, you only need a ball and a piece of chalk to play this game. Mark off a big rectangle on the ground with the chalk, and draw a line through the center of the rectangle. Each player stands in their side of the box. One player starts by serving the ball into the other person’s box, and that player must send the ball back by hitting it. You can’t hold the ball – you can only hit it back into the other person’s box. The ball can only bounce in your box twice before making it to the other side.

Comment and tell us about your favorite multicultural game to play with your family!