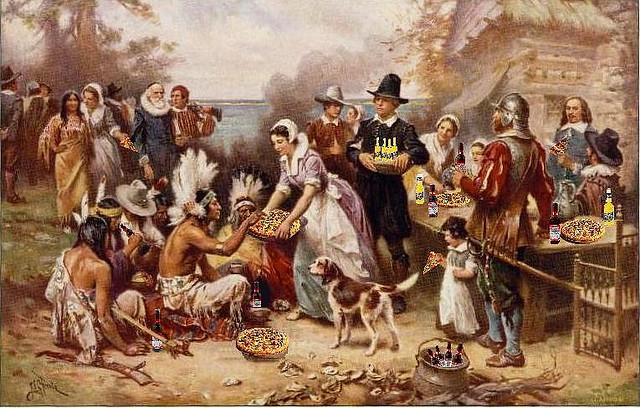 Stories about the origins of the North American celebration of Thanksgiving abound. Some attribute it to the Pilgrim’s prayerful appreciation for having survived an arduous journey across the sea. Others claim that it commemorates the kindness of the Native Americans who helped them survive a cold winter without food. Still others say it stems from the originally pagan tradition of giving thanks for yet another bountiful summer crop.

Whatever the origins of this North American holiday, most of us can agree that it is a holiday motivated by feelings of appreciation, humility, and kindness. At the heart of Thanksgiving is our deepest gratitude for simply being alive to witness one more day. It is about surviving in a world bombarded by uncertainty and change. No one can know what tomorrow will bring, and all we can do is appreciate what we have right here and right now.

Immigration is central to the Thanksgiving story. The New World was a destination for European settlers searching for new beginnings, merchants seeking unlimited resources, and sadly, African slaves transported unwillingly to a strange new land. These newcomers, in turn, inundated and overpowered the Native Americans who had been living on this bountiful land for many generations. Ultimately, they too became immigrants in their own land, as they were pushed farther and farther to unknown territories.

Thanksgiving tells the tale of the settler, each with his or her own personal history. Our ancestors brought traditions tucked away in travel bags between sorrows of lands lost and hopes for a new and better life. Immigration has played an intrinsic role in all Americans’ lives: this movement of peoples has formed America into what it is today.