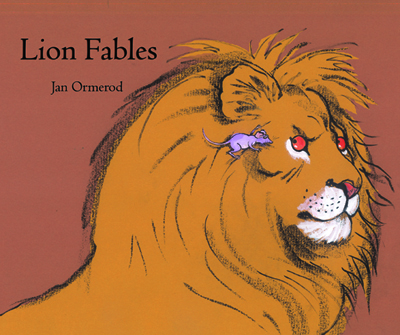 This book contains both the Aesop’s fable The Lion and the Mouse, as well as the Malaysian fable The Hare’s Revenge. The stories are retold and illustrated by award-willing author and illustrator Jan Ormerod. The Lion and the Mouse tells the familiar tale of a little mouse, who captured by the self-acclaimed “King of the Beasts,” bargains for his life with an offer of friendship and aid should the lion ever have need of him. Amused by the offer, the lion lets the mouse go, never thinking he actually will need the aid of such a small creature. Yet in only a matter of days, the lion is captured in a hunter’s net. The mouse sets the lion free by nibbling the rope in two, and the lion is humbled and grateful.

The Malaysian fable The Hare’s Revenge is a bit darker. In this tale, the lion is a “bully and a fool,” who boasts and rages about how strong and brave he is. His poor neighbor, the hare, can stand it no longer and decides to get his revenge. He tells the lion about another lion who has declared that HE is the King of the woods. The hare leads the boastful lion to the new lion’s “hiding place” at the bottom of a well. Tricked by his own reflection, the enraged lion flings himself down the well never to be seen again.

The illustrations of both stories are dramatic, with the lion’s head sometimes taking up the whole page. Jan Ormerod is able to depict the different backgrounds – arid desert and lush Malaysian countryside – with minimal brushstrokes. The illustrations instead focus on the animals and are quite striking and expressive.

Between the two stories is a page that has teacher’s notes, with some interesting tips on how to talk to children about the stories. Although they are designed for classroom use, the suggestions would be of interest to parents teaching their own children as well.

If you’re interested in purchasing this book please visit the Language Lizard webpage at www.languagelizard.com/Lion_Fables_p/lion.htm