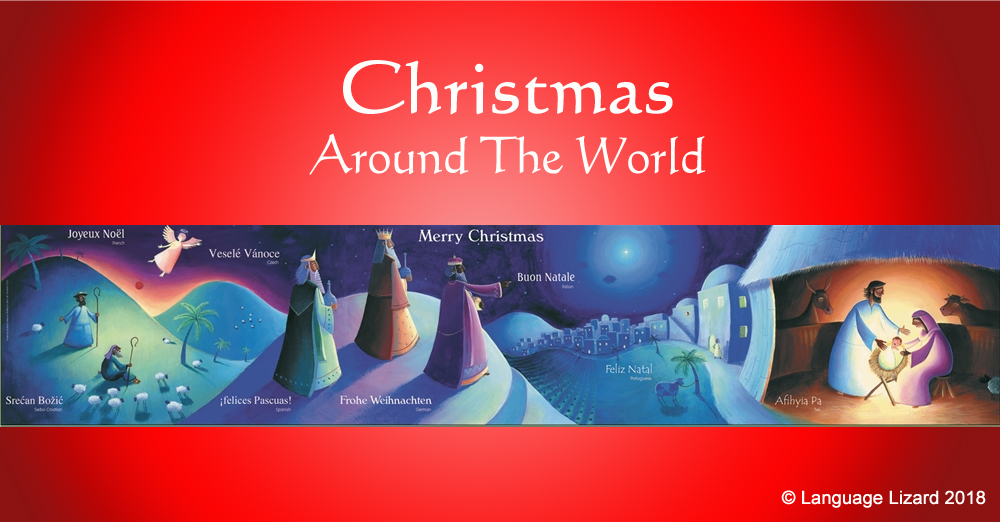 Teaching in a small, rural, primary school rooted in the Catholic ethos in Ireland, Christmas is a central tradition celebrated by the students. Each year in December, the children perform a Christmas pageant, attended by their families and fellow schoolmates. However, my colleagues and I decided that, this year, we would divert from telling the traditional story of the birth of Jesus Christ and the Nativity and move instead toward teaching a more inclusive Christmas story, one that authentically captures the experiences of children from a range of diverse backgrounds. It is from this theme: “Christmas Around the World” that my journey into fostering an appreciation for the diversity of Christmas customs among my students originated.

Fostering an Appreciation for Diversity

As a teacher of 2nd and 3rd class students (ages 8-10), the children I teach have grown up hearing about the customs and stories familiar to them and their families during Christmas time. I wanted to push their understanding of this holiday and help them realize that the celebration of important feasts and festivals are dependent on a variety of factors, including (but not limited to) their nationality, belief systems, family values and personal identity. We have done much work this school year already on the concept of identity and how our identity shares features that are common to other people, distinct from other people and unique to ourselves. Arising from this conceptual understanding, it made sense to take our Christmas show in a similar direction and investigate some of the traditions in December through a multicultural lens. What better way to do it than through the medium of drama, where the children can truly step into the shoes of another and see Christmas traditions from a multitude of perspectives?

“Our show will help you see that Christmas isn’t the same for you and me!”

My students and I have learned much from this project. As we looked at how Christmas is celebrated in Poland through a retelling of Marek and Alice’s Christmas in class one day, discussion naturally followed about how the holiday is marked in other countries. There are some fantastic resources online that we used in devising the script for the show. Writing a script for over 30 excited children, making sure that every child has their time to shine on stage, while also allowing them to learn about cultures different from their own was no easy task, let me tell you! However, now that rehearsals have started, I can tell already that it is a project that has been worthwhile for my own knowledge but also for the children’s attitudes of acceptance and appreciation of diversity.

So what does Christmas look like around the world?

Our pageant looks at some of the customs, foods and songs associated with Christmas in a host of countries. For example, in certain parts of Russia, many people do not eat on Christmas Eve until the first star has appeared in the night sky. Families then eat 12 courses of food to represent the 12 disciples of Jesus. My children were fascinated to learn about the tradition of eating kutia, a porridge-like meal, during the Christmas feast. All the family eats from the same bowl to symbolise unity. Some families even hold the custom of throwing a spoonful of kutia up onto the ceiling and, if it sticks, they hope to enjoy good luck for the year ahead.

The traditional Christmas songs or carols that the children have been learning since they started primary school quite often originated in another country and from another language. For example, the song “O Christmas Tree” was originally in German and called “O Tannenbaum.” Other songs, such as “O Holy Night” (originally a French song), “Deck the Halls” (from Wales) and “The Little Drummer Boy” (from Czech Republic) are much loved by both children and adults alike. Part of our show sees the children singing the well-known song “Silent Night” in 3 languages – English, Irish, and German, the language it was originally sung in. The lyrics, with a phonetic pronunciation are here if you’d like try it yourself: 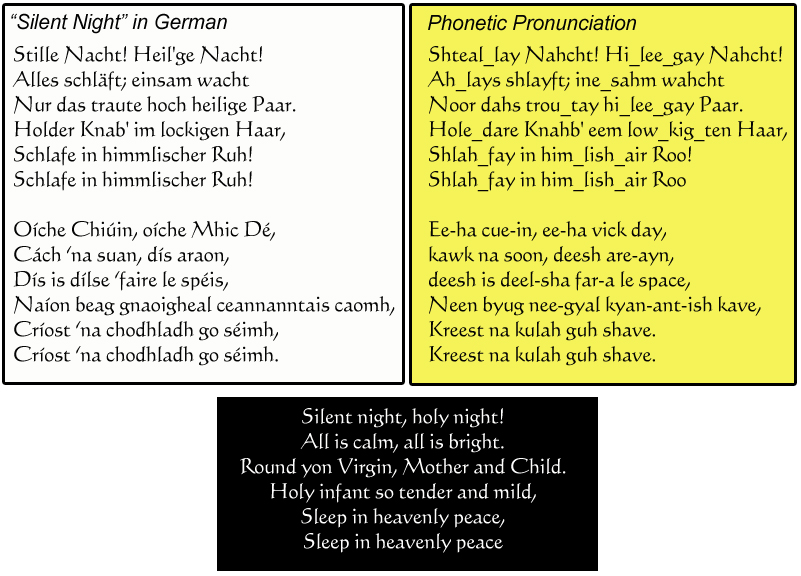 Of course, one of the most exciting parts of Christmas for children is the receiving of presents. In Ireland, Santa Claus (or Daidí na Nollag in the Irish language) travels around the country on his sleigh, delivering presents to all the boys and girls who have been good. Children usually go to visit Santa in the weeks leading up to Christmas to let Santa know what they would like him to deliver to them.

Our show has a scene where Santas from other countries are being interviewed about how they deliver presents to children where they come from. In the Netherlands, Santa is called Sinterklaas. He usually travels on a white horse, wearing a tall hat with a jewelled staff in hand as he travels through the night. His companion Grumpus is said to rattle his chains at children who are naughty!

In France, Père Noël wears a long red cloak to keep warm. Children leave their shoes out by the fireplace on Christmas Eve night in the hope that they will be filled full of presents when they wake on Christmas morning.

In Russia, Ded Moroz or “Father Frost” is assisted by Snegurochka (meaning “Snow Maiden”) on Christmas Eve night. You’d better watch out though because he has been known to kidnap naughty children!

In Italy, the tradition of the jolly man wearing red is quite different! La Befana is a witch who travels around on her broomstick every year to deliver gifts to children. Sometimes, she may even sweep the floors of the houses she visits with her broomstick to sweep away any bad luck. Both the children and I had never heard of this particular tradition and many were eager to play this part in the show.

Piquing the children’s natural interest in the figure of Santa Claus provided a rich stimulus for discussion about traditions that their own families celebrated. Some children in my class contacted relatives in other countries in places as far from Ireland as Australia to hear about how they eat their Christmas dinner on the beach!

Before the Curtain Goes Up

What has been gained from looking at Christmas from an international lens? Undoubtedly, the children’s knowledge has broadened in myriad ways through our exploration of the theme “Christmas Around the World.” In investigating the traditions, foods and songs of other countries, the children have been enabled to hold a mirror up to their own traditions and see similarities and differences between their culture and the cultural identities of other boys and girls around the world. Through music, dance, and drama, the children are very tangibly realising that the holiday of Christmas may be celebrated differently around the world, but that does not make it any less special. Our show hasn’t even been performed yet, but I hope the children will remember it and what it has taught them for many years to come.

Edmond Gubbins is a 2nd and 3rd class elementary teacher from County Limerick in Ireland. Owing to his extensive work with Language Lizard during the completion of his Master’s in Education at West Chester University in Pennsylvania, he has a keen interest in multiculturalism and fostering an appreciation for diversity in his students.