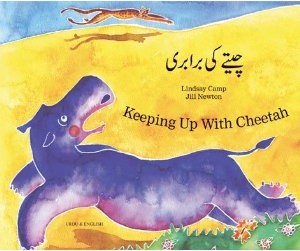 Cheetah loves telling jokes and Hippopotamus loves to listen and laugh at Cheetah’s jokes – even when they aren’t very funny! This synergy makes them the best of friends. There is only one problem: Hippopotamus can’t run very fast, so he can’t keep up with Cheetah.

Cheetah goes in search of a better friend, one who will appreciate his jokes and be able to run with him. Hippopotamus is so sad, and tries to practice running, but eventually realizes he will never be able to keep up with Cheetah. He decides to do what he loves best, and goes for a “good, long, deep, muddy, wallow.”

Cheetah makes friends with fast-running Ostrich, but Ostrich doesn’t like jokes. Next Cheetah tries Giraffe, who is too tall to hear his jokes. Hyena just laughs at Cheetah’s jokes, without even listening to them!

Cheetah recognizes that he really needs a “different sort of friend” – one who appreciates his humor – one like Hippopotamus. But when he goes looking for Hippopotamus, he can’t find him. Cheetah realizes “how silly he had been to lose such a good friend” as Hippopotamus. In his search for speedier friends, he had sacrificed something he realized was even more important to him.

Suddenly Cheetah sees Hippopotamus in the river. He approaches and delivers a knock-knock joke. As Hippopotamus laughs and laughs, we understand that Cheetah has learned an important lesson about friendship: friends should be cherished and appreciated for what they are, not criticized for what they aren’t. This charming story delivers an important lesson in a compelling and winning manner, and its bright illustrations and understandable message is sure to please young readers.

If you’re interested in purchasing this book, please visit the Keeping Up With Cheetah webpage at: http://www.languagelizard.com/Keeping_Up_with_Cheetah_p/cheet.htm